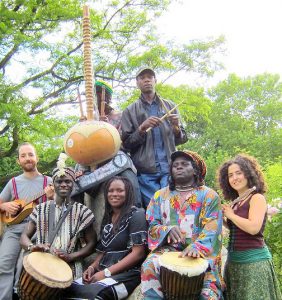 A fusion of Sénégambian and European musicians, The Kilinba Orchestra presents original compositions in traditional and modern African styles, including afro-reggae, salsa, soul and sukus. Lyrics are in French, Mandingo and Wolof, and treat themes such as peace, unity, justice, education, nature, and love.
Based in Berlin, Germany, the band was formed in 2011 around the singer and composer Samba Bory and Kora player Ibrahim Diebate, both from Sénégal. Instrumentation includes vocals, djembe, kora, drums, guitar, bass and flute.
Kilinba has performed at festivals in Poland, France and Germany. The orchestra performs regularly in Berlin, and will make its first studio recordings in October 2012. Their first tour „Sahel Calling“ will launch in Berlin on 1 December and will include shows in Germany, France, Spain, Morocco and Mauritania. Calling for awareness and action on the Sahel food shortage and the socio-political crisis in Mali, the tour will culminate at the Festival au Désert in February 2013.
http://kilinba.bandcamp.com/
Gastveranstaltung
Einlass ab 20 Uhr